11am-4pm Saturdays and by appointment

In celebration of its 20th anniversary season, the SFArtsED Players, a troupe of 39 young performers ages 10 to 14, were all set to revive the classic Broadway musical comedy Once Upon a Mattress, which their predecessors had performed two decades before when the company was still new.

When the pandemic threatened to change everything, the performers, guided by a team of visionary artist mentors, adjusted their process. Rehearsals would be exclusively via Zoom, and the stage musical would now be a movie musical to be filmed via Zoom and with key solos captured one at a time against a green screen. Vocals would be recorded individually, and the designers would work in bold new ways. Tiersa Nureyev’s costumes would have to be made without any in-person measurements or fittings, and set designer Stacey Ransom would create a virtual world through PhotoShop. Director of photography and editor Pete Belkin would also be required to master and implement a whole lot of new technology to get the film ready for its March 18 premiere at the Flix at Fort Mason drive-in.

To continue the celebration of the Players’ 20th anniversary season and to extend the applause for all the artists involved in the project, SFArtsED is pleased to present Making Mattress: a new Players performance process. This exhibition highlights the work of the designers through the display of their colorful sets, props, and costumes and sheds light on the creative process with a new behind-the-scenes documentary created by SFArtsED Artistic Director Emily Keeler and Pete Belkin.

Says Keeler: “This is an in-person celebration of a work of art made with the peculiar restrictions of the pandemic and with the indomitable spirit of human creativity.” 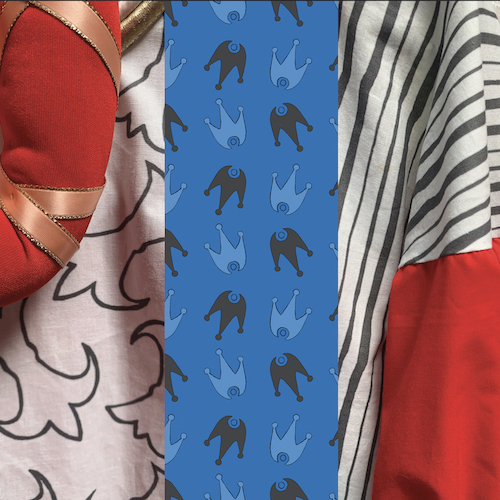 The San Francisco Arts Education Project has its roots in the Neighborhood Arts movement of the late 1960s, and for 51 years has stayed true to its mission: to enrich the lives of children by facilitating hands-on participation in the visual and performing arts—taught by practicing artists. We do this in many ways and across a multitude of disciplines.

SFArtsED supports artist residencies in an array of visual arts, dance, drama, musical theater, world rhythms, and choral expression at some twenty public schools and at after-school programs, where we also subsidize all administrative expenses. And at SFArtsED’s summer camps, students are immersed in a wide range of expressive disciplines, with nearly 20% of campers receiving critical scholarship assistance.

The musical theater troupe, the SFArtsED Players, offers a rigorous, after-school and weekend training program for serious young performers (ages 9-14), culminating in a fully-realized production every spring. Many of these talented students go on to attend Ruth Asawa San Francisco School of the Arts (SOTA) for high school. Artists, singers, and dancers at the high school and college levels benefit from internship opportunities at our summer camps and school programs. And students in SOTA’s technical theater program gain valuable outside experience in lighting, sound, and stage management at every Players’ performance. Since March, 2016, SFArtsED has been fortunate to have an office and adjacen gallery/classroom space at the Minnesota Street Project in the Dogpatch arts district, where we hold workshops and exhibit student work.

About the SFArtsED Players

Founded in 2001, the SFArtsED Players is a musical theater company that reflects San Francisco in all its diversity. Hailing from the neighborhoods of the City and from around the bay, the SFArtsED Players comprises 47 theater performers who come from SFArtsED’s performing arts residencies as well as from the organization’s summer arts intensive, called SFArtsED Summer. The young performers are selected for their talent and enthusiasm for and commitment to the musical theater form. They work with directors of the company 10 hours each week, training as “triple threats” – actors, singers, dancers – and rehearsing for their performances. The company performs original musicals and revues as well as Broadway classics. This year’s troupe represents more than two dozen Bay Area schools in San Francisco, Oakland, and Marin County, including 15 public schools.