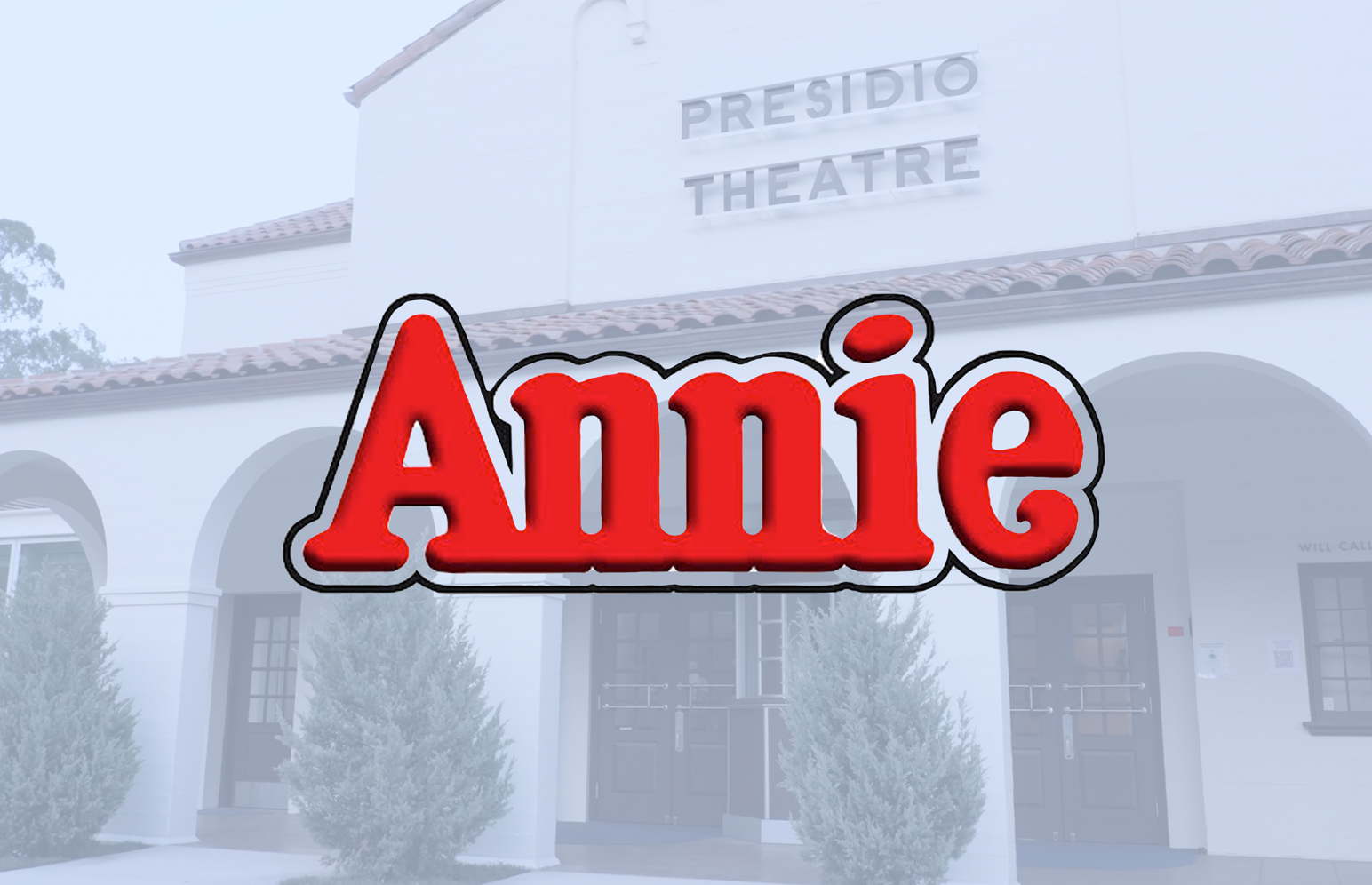 Presents the SFArtsED Players in ANNIE

Produced in association with The Presidio Theatre

Check out the Annie program!

The San Francisco Arts Education Project proudly presents the SFArtsED Players in their 20th anniversary in-person production of Annie, the beloved family musical about hope and optimism in dark times. The Tony Award-winning musical features such classic songs as “The Hard Knock Life,” “Maybe” and, of course, “Tomorrow.”

Annie is presented at the Presidio Theatre for four performances only April 15, 16 and 17. The Players will celebrate two decades of musical theater performances with a gala benefit before and after the final show on Sunday, April 17. The celebration will also honor Peggy Haas for her devotion to creating theater for the entire family through her the Children’s Theater Association as well as her dedicated work transforming the Presidio Theatre into one of San Francisco’s finest performance venues.

The Players, a troupe of 29 performers, ages 9 to 14, are thrilled to be performing for the first time at the beautifully renovated Presidio Theatre. “It is with great joy that we have approached this 21-22 season for our SFArtsED Players which will culminate in a performance of the classic musical Annie,” says Artistic Director Emily Keeler. “With our group of distinguished mentors and talented young people, we have taken up our work again in-person, singing, dancing, and acting together to create this piece. Annie is at its very core about the power of positivity and hope—full of wonderful, funny characters and charming music. And, as always with our performances, we will infuse this fairy tale (with its dark undercurrents) with exuberant dancing and spell- binding performances.”

We look forward to seeing audiences of all ages in the beautifully refurbished Presidio Theater, to share this time of the reopening of the world with our company as we celebrate our 20th anniversary of in-person performances.” Ms. Keeler has worked primarily in the Bay Area as a dancer, choreographer, educator, and advocate since 1975. She was both a dancer and resident choreographer for the San Francisco Moving Company for eight years and a principal dancer for Cliff Keuter’s New Dance Company and Joe Goode Performance Group. Ms. Keeler has choreographed for numerous companies, both modern and ballet, including Joffrey Dancers, Oakland Ballet, and DanceArt and has been a movement consultant and choreographer for American Conservatory Theater, Magic Theater, George Coates Performance Works, Pickle Family Circus, Make*a*Circus, Z Space, the Dance Generators, and Choral Chameleon. Ms. Keeler has been a resident artist and lecturer at DeAnza College, Mills College, San Francisco State, NYU Musical Theater Graduate Writing Program, and at the Ruth Asawa San Francisco School of the Arts. She is the recipient of four National Endowment for the Arts Choreographic Fellowships and has been a judge at both the Colorado Dance Festival and the American College Dance Festival. Ms. Keeler served for three years as the dance member of the San Francisco Arts Commission. In 2016 she was awarded an MFA from San Francisco State in Creative Writing. She has been the Artistic Director of SFArtsED since 1985, a collaborating artist and producer for the Players since 2001, and is one of the curators at SFArtsED’s gallery at Minnesota Street Project. She respectfully thanks her teachers Roberta Humphrey, John Wilson, Aaron Osborne, Margaret Jenkins, Elina Mooney, Alonzo King, Yehuda Maor, Kahz Zamuda, John Lasky, and Cooley Windsor.

Mr. Duncan is a native San Franciscan who has worked as a theater artist in the Bay Area most of his life. As founder and Artistic Director of Duncan & Company, he toured the West Coast for seven years. Mr. Duncan’s writing career began in 1969 with Uhuruh, which appeared Off Broadway in New York at the City Center Theatre. Since then, he has authored and produced eight original musicals including Billie’s Song, winner of six Bay Area Critic Awards including Best Musical and Go Down Garvey produced by TheatreWorks. Mr. Duncan has written the librettos and lyrics for eight of SFArtsED Events and three original musicals for the SFArtsED Players: Invisible Princess, One, and Pinocchio Jones. He is also the recipient of the Bay Area Critics Circle Award for his choreography for TheatreWorks’ production of RAISIN as well as the Dean Goodman Choice Award for outstanding achievement in theatre. For five years he served as Artistic Director for the Mayor’s Summer Youth Program in Bayview Hunters Point and for ten years with United Projects, an arts organization that trained young people in the performing arts. Mr. Duncan has had a long association with the Ruth Asawa San Francisco School of the Arts as the director of their school-wide musicals, has taught theater at the American Conservatory Theater, and was on the faculty of the Oakland School of the Arts as theater teacher and director of their musicals. He has worked with SFArtsED in their school residencies, Broadway Bound camps, and as the director of all but two of their productions for the Players since 2001. He is at work on a new musical: Every Saturday Night about the vibrant world of Western Addition jazz clubs when he was a child.

Mr. Flavoni is a young conductor serving as an Assistant Conductor of San Francisco Symphony and the Lakes Area Music Festival. He has been mentored by several luminaries of classical music, including Manfred Honeck, James Levine, Michael Morgan, Christian Reif, and Kent Nagano, and has assisted such notable conductors as Herbert Blomstedt, Ton Koopman, and Marek Janowski. In the field of opera, he has worked as assistant conductor on numerous works, including The Rake’s Progress with the Lakes Area Music Festival, Die Walküre with the San Francisco Symphony conducted by Simone Young, and Barber’s Vanessa with West Edge Opera. He has served as Music Director of the critically acclaimed Abraham in Flames, a 2019 opera by Niloufar Talebi and Aleksandra Vrebalov featuring the Young Women’s Choral Project of San Francisco and alumni of the San Francisco Opera Merola Program.

An ardent advocate for inspiring music performance in the younger generations, he has served on the faculty of San Francisco Conservatory of Music as Music Director of Pre-College Opera and Musical Theatre. Mr. Flavoni formerly served as a research fellow in music and philosophy at the Zephyr Institute at Stanford University. He has also spoken on the topics of music, politics, and social justice in the 4D Mentor Talk Series with the Khadem Foundation. He attended the University of California, Berkeley as a Regents and Chancellor’s Scholar on full academic scholarship, studying conducting under David Milnes and Marika Kuzma, harpsichord under Davitt Moroney, composition under Franck Bedrossian, and musicology under Richard Taruskin. While at Berkeley, he served as music director of the UC Berkeley Opera Ensemble, including a production of Purcell’s Dido and Aeneas, which won the 2015 Eisner Prize. He later went on to attend the University of Michigan.

Ms. Gentry has been a choreographer with SFArtsED Players and Broadway Bound summer camp since graduating from the University of San Francisco in 2010. A performer throughout the Bay Area, she has performed most recently in the ensembles of The Rocky Horror Show at Ray of Light Theatre, and Saturday Night Fever at Broadway By the Bay. She has also choreographed for Ruth Asawa San Francisco School of the Arts mainstage musicals, Jewish Community High School, and Throckmorton Theater. In the Players 2018-2019 season, she had the privilege of directing the Players production of Building Broadway. Ms. Gentry is immensely proud of the hard work of each of these young performers and the entire artistic staff for their valuable contributions and collaboration.

Some of our Players visited the Presidio Theatre for the first time: