This summer, we’re going On the Town 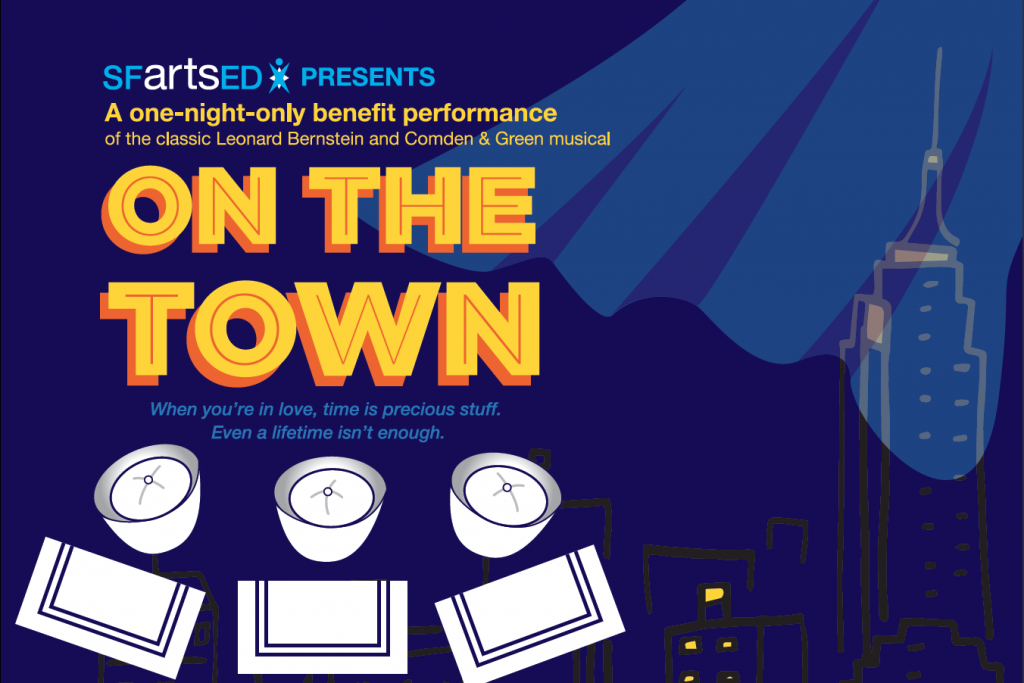 For a fourth summer, SFArtsED partners with the UC Berkeley Summer Symphony to bring a Broadway classic to new and vibrant life.  Following in the footsteps of Carousel, Guys and Dolls and Oklahoma!, SFArtsED is pleased to present Leonard Bernstein, Betty Comden and Adolph Green’s On the Town performed one night only in a benefit for SFArtsED. Click to order tickets.The show is at 7:30 p.m. on Monday, July 29 at the San Francisco Conservatory of Music.

We’re thrilled to announce that our special guest will be jazz great Paula West playing the role of The Diva and siging the song “Ain’t Got No Tears Left.” 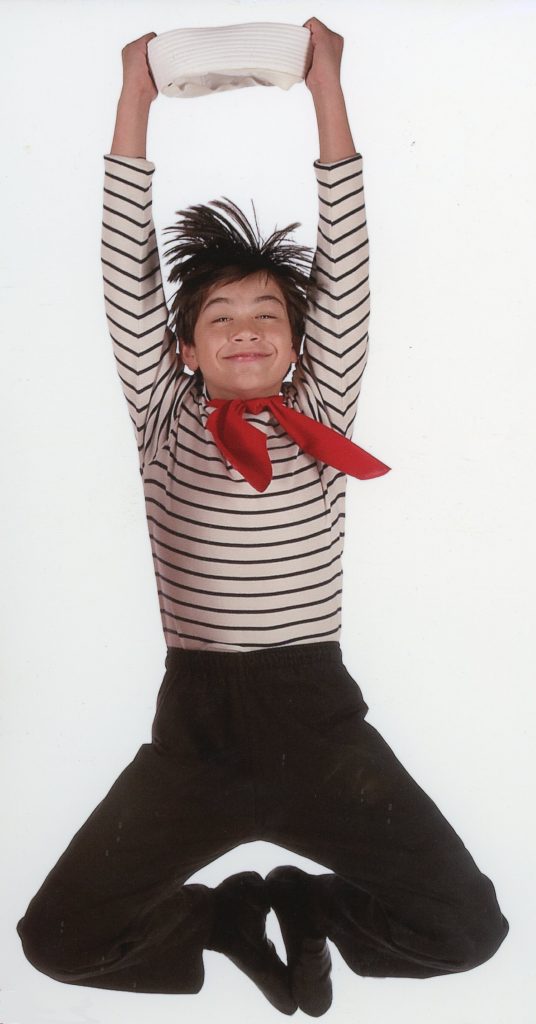 The San Francisco Arts Education Project’s summer production of On the Town on Monday, July 29, 2013 will be rousing, beautiful and everything this classic Leonard Bernstein-Jerome Robbins-Comden and Green musical should be. Accompanied by the 46-piece UC Berkeley Summer Symphony, the young performers, ranging in age from 9 to 25 will make this one of the can’t-miss events of the summer. The show is at 7:30 p.m. at the San Francisco Conservatory of Music, 50 Oak St., San Francisco.

Jazz great Paula West, fresh from her triumph in Wynton Marsalis’ Pulitzer Prize-winning oratory Blood on the Fields with Jazz at Lincoln Center, will play the part of The Diva, who performs “Ain’t Got No Tears Left.”

The end result of an intensive summer program involving an intensive three-week rehearsal period in preparation for the show, this On the Town features an array of San Francisco Arts Education Project students.

The young performers, all 60 of them, are accompanied for a fourth year by the 46 musicians of the UC Berkeley Summer Symphony Orchestra conducted by Music Director Henry Shin. The production is directed by Danny Duncan, a celebrated local director and writer who has worked with SFArtsED for more than two decades.

Greene, who has worked with SFArtsED since 2003 says she looks forward to former students returning to share their talents after working in universities and conservatories, professional gigs and national tours. “They come to share their talents with incoming generations, and there is a strange new look in their eyes that I usually interpret as appreciation,” Greene says. “Alumni return as young artists with the realization that we have always treated them as such. They are not crossing over; they have been there all along.

Angela Travino, a returning alumna who will star as Hildy Esterhazy in On the Town, first performed with SFArtsED in 2000’s The Giver before going on to appear with the Players in The Invisible Princess and Once Upon a Mattress. Toward the end of her time at Syracuse University College of Visual and Performing Arts, Travino was hired as a swing on the national tour of South Pacific. Now the New Yorker is back in San Francisco working with young performers and preparing to stop the show with Hildy’s “I Can Cook Too.”

“I find teaching to be another kind of joy,” Travino says. “I like that you can go out in the world, have your own experiences and bring something valuable back to share with the kids.”

Travino adds that she’s happy to give back to SFArtsED, an organization she feels gave her a leg up as a performer.

“SFArtsED made me confident in my own craft,” she says. “It makes me realize how valuable and important these younger years are, especially in terms of training and discipline. It’s very serious while being incredibly fun.”

Lilli Wosk, who just came off the road as musical director for the tour of Diane Paulus’ Tony Award-winning Hair, has worked with SFArtsED for nine years and regularly returns to work with the children and the alumni. “They’re some of the most inspired an uninhibited humans to work with,” Wosk says. “The teaching artists are fantastic, but I think the alumni mentors, because they’re a little closer to the kids in age, are somehow more relatable.”

Wosk says that arts education is something she believes in wholeheartedly. “Our education system tends to put kids in boxes,” she says. “And not every kid fits. It can be easy to be defeated by academia, but the arts let kids feel special and important when sometimes it’s hard to feel that way. I also think learning how to be creative fosters social skills that you really need to be successful in any industry.”

SFArtsED Artistic Director Keeler notes that this year, the Tony Awards telecast revealed a new “Golden Age of the Child in Musical Theater,” with many shows currently on Broadway depending on the talents and special gifts that only young people can bring to the stage. “It may have surprised the audiences of that award ceremony or those in the theaters,” Keeler says, “how powerful 10-year-olds can be as performers. But we at SFArtsED trust that when children are given the right opportunities – great mentors, teachers, the right material and highest expectations – they make a magic on stage like no other.”

About On the Town

On the Town is one of those quintessentially great pieces of American musical theater. The original creative is a veritable who’s who of theater greats: composer Leonard Bernstein crafting his first full theatrical score; book and lyrics by Betty Comden and Adolph Green, who also wrote the screenplays for Singin’ in the Rain and the book and lyrics for Bells Are Ringing; choreography by Jerome Robbins, who would work with Bernstein again on the seminal West Side Story; and direction by George Abbott, whose work in the

1940s and ‘50s – Wonderful Town, Damn Yankees, The Pajama Game, Fiorello! Among others – came to define the Golden Age of Broadway.

With such a solid team, it’s no surprise that On the Town was a huge hit from its opening in 1944 right up to the movie premiere – starring Gene Kelly and Frank Sinatra – in 1949. What started out as a one-act ballet called Fancy Free (with music by Bernstein and choreography by Robbins) became a full-blown musical comedy romance about three sailors on 24-hour leave in New York City and their adventures with fast-talking lady cab drivers, a beautiful anthropologist and Miss Turnstiles. The score includes the standards “New York, New York,” “Some Other Time,” “Lonely Town” and “I Can Cook Too.”

About SFArtsED and SFArtsED Summer

For nearly five decades, the San Francisco Arts Education Project has provided hands-on art experiences that expand minds, open hearts and ignite creativity. Since its founding in 1965 by acclaimed artist Ruth Asawa, SFArtsED has touched the lives of more than 200,000 children in the Bay Area through teaching artists in the public schools, after-school programs, internships, summer camp and musical theater troupe. Today, SFArtsED works with more than 70 professional, mid-career artists, making the organization one of the largest employers of artists in San Francisco. In the 2012-13 school year, SFArtsED had Artist-in-Residency programs in 25 public schools. SFArtsED Summer is in the midst of its 18th year offering visual and performing arts classes to children 6 to 14 years old taught by some of San Francisco’s best teaching artists.

The SFArtsED Players is a musical theater company that reflects San Francisco in all its diversity. Hailing from the neighborhoods of the City and from around the Bay, the SFArtsED Players comprises 40 theater performers who come from SFArtsED’s performing arts residencies as well as from SFArtsED Summer camp. The young performers are selected for their talent, enthusiasm and commitment for the musical theater form. They work with directors of the company 10 hours each week, training as triple-threat actors-singers-dancers – and rehearsing for their performances. The company performs original musicals and revues as well as Broadway classics. The 2012-13 troupe represented 24 different Bay Area schools in San Francisco, Oakland and Marin County, including 15 public schools.

For more information or to set up interviews, photos or a rehearsal visit, please call 415 551-7990, e-mail chad.j@SFArtsED.org. 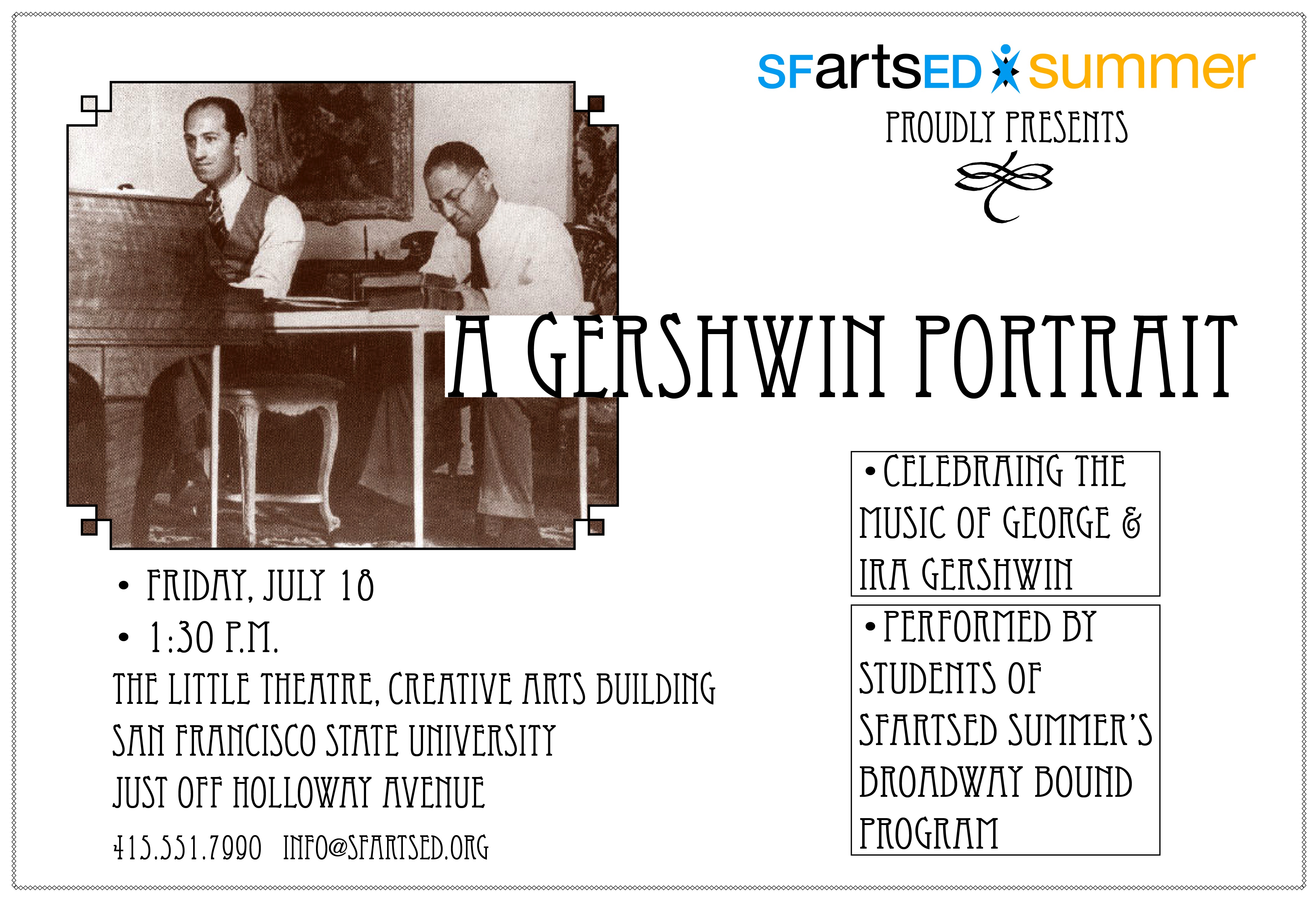